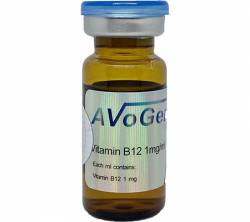 The solution is administered with an insulin needle. Inject slowly to prevent minor PIP

B-12 is an essential water-soluble vitamin that plays an important role in many functions in the body, including: DNA synthesis, energy production, nerve cell health, red blood cell formation, neurological function.

B-12 is present in many food sources (mainly animal-based), where it is bound to the protein molecules in that food. Vitamin B-12 is separated from the protein during digestion and is absorbed into the bloodstream. Adequate stomach acid is required to release the vitamin from the protein, and a substance called intrinsic factor is necessary to ensure its absorption. People who are unable to absorb vitamin B-12 properly may have pernicious anemia, which is a type of anemia characterized by a lack of intrinsic factor.

The average daily intake of vitamin B-12, as recommended, is 2.4 micrograms (mcg) for men and women over 14. Pregnant and breastfeeding women require slightly more, at 2.6 mcg and 2.8 mcg, respectively.

Vitamin B-12 shots are injections containing high levels of cyanocobalamin. These shots, which can be self-administered or given by a doctor, can quickly boost B-12 levels in someone who is deficient.

Cyanocobalamin is available in liquid, tablet, or capsule form. Certain foods, such as cereals and non-dairy milk and yogurts, may be fortified with the man-made form of vitamin B-12.

It is important to note that low levels are rare in most healthy adults because the human liver stores several years’ worth of vitamin B-12.