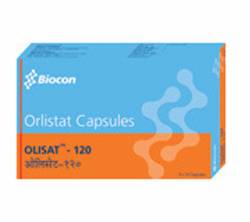 Olisat is combined with a reduced-calorie diet to promote weight loss. Olisat also may be used to prevent weight gain after weight has been lost. Candidates for treatment with Olisat are patients who are obese with a body mass index (a measure of obesity) of more than 30 kg/m2. Candidates also include patients with a body mass index of between 27 and 30 kg/m2 if other risk factors for arteriosclerosis are present such as high blood pressure, diabetes, and elevated blood cholesterol or triglycerides. Based on several scientific studies, the average weight loss that is achieved when orlistat is taken as recommended for six months to one year is 12.4 to 13.4 pounds.

The recommended prescription dose for Olisat is one pill (120 mg) three times daily. Olisat should be taken one hour after or during a meal containing about 15 mg of fat. Meals without fat do not require Orlistat. No additional benefit has been shown when Olisat was taken in doses greater than 120 mg. Patients should eat a nutritionally balanced, reduced calorie diet that contains approximately 30% of calories from fat.

The most common side effects of Olisat are oily spotting on underwear, flatulence, urgent bowel movements, fatty or oily stools, increased number of bowel movements, abdominal pain or discomfort, and inability to control stool (incontinence). Between 1 in 250 and 1 in 70 patients experienced one or more of these symptoms in the first year. Generally, the side effects occurred within three months of starting therapy.

In about 50% of patients, the side effects resolved within one to four weeks, but the effects in some patients lasted 6 months or longer. To reduce the occurrence of these side effects, meals should contain no more than 30% fat because it is the unabsorbed fat that causes most of the symptoms. Patients receiving Orlistat with a history of oxalate kidney stones may develop increased levels of oxalate in their urine, which may increase the risk of kidney stones.