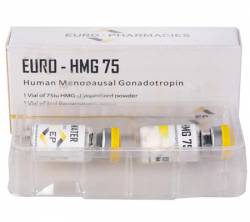 Euro-HMG 75iu  (Human Menopausal Gonadotropin) is used for stimulating hormone FSH and LH. This simply stimulates your natural test production and keeps hcg working optimally. Your sex drive and sense of well being come back more rapidly then with other treatments as well as your potential for staying or becoming fertile.

Euro-HMG 75iu is a drug similar to HCG in use and some of its function, but also has the added benefit of FSH stimulation, while HCG is known mainly for LH stimulation. Although it hasn't been around as long and isn't as recognized as HCG, HMG is steadily picking up more interest in the bodybuilding community for the roles it can play in testosterone recovery. Euro-HMG 75iu was originally designed as a fertility drug, as FSH stimulation can greatly induce higher sperm count production by the body. Bodybuilders who don't see the results and recovery they want from a typical PCT protocol may find Euro-HMG 75iu beneficial since it is able to stimulate the body's receptors at a wider range of points than HCG is able to.

Euro-HMG 75iu (Human Menopausal Gonadotropin) can be most effective when ran alongside HCG and other LH stimulating drugs such as clomid or nolvadex during pct. A typical dose of 75-150iu a day for 2 weeks is sufficient for restoring normal testicular function and sperm count in males. Although some may find that a longer protocol is needed due to extended periods of staying shut down or the use of hormones which are harsher on the body's natural testosterone function such as such as Trenbolone etc.