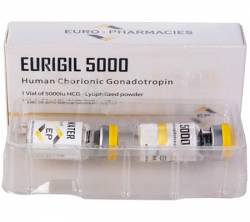 Eurigil is used medically to positively influence ovulation in women, and to help produce estrogen. It is also utilized in fertility medicine to aid in ovulation.

Male bodybuilders used Eurigil for another important reason. HCG is almost exactly the same amino acid sequence as Luteinizing Hormone (LH). LH is normally produced in the pituitary gland which is then circulated to the testes where it contacts the Leydig cells. The Leydig cells then produce androgens such as testosterone. Obviously this means so-called natural bodybuilders reported use of HCG to increase endogenous (natural) testosterone levels. According to some clinical studies this works so well that an injection of 1500-2000 i.u. of HCG has increased plasma testosterone levels 200-300% over normal levels. For those males who utilized high aromatizing steroids, HCG was a "partial" cure for restarting natural testosterone production either mid or post-cycles.

When administering exogenous (occurring outside the body) androgens, such as steroids, the body's endocrine system shuts down (partially of completely) natural androgen production in an attempt to maintain homeostasis. This is simply because the hypothalamus senses the excess estrogens from steroid aromatization (and to a lesser degree elevated androgen levels) and signals the pituitary (hypophysis) to partially or completely stop producing LH and FSH (follicle stimulating hormone). Since the Leydig cells in the testes do not receive the signal from LH, they partially or completely shut down testosterone production. Sperm production is also reduced as a result of FSH down-regulation. Because the testes are not producing androgens and/or sperm at their normal level, the testes shrink. This often causes a drop in libido too. Many heavy steroid users reported sexual dysfunction for a brief period post-cycle.

So what did the men do about “the boy’s”? Eurigil act as a replacement for the LH normally produced by the pituitary gland which normally stimulates androgen and sperm production by the testes. When 2000-5000 i.u. of HCG  was injected every 5th day for 2-3 weeks, mid or post-cycle, the testes began to function again. Also an increase in total testosterone was realized and athletes often made some of their best gains at this point.

It also helped to keep the "significant other" significantly happy! When HCG was administered beginning the last week of an steroid cycle and for an additional 1-2 weeks post-cycle, testes function normalized again and much of the common post- steroid cycle muscle mass and strength loss was avoided. However, our athletes were not out of the woods (with acceptable wood) quite yet. HCG has been a utilized as a "partial cure" for the shut-down of the hypothalamus-pituitary-testes-axis (HPTA).

HCG only "replaces" natural LH. The pituitary and hypothalamus part of the HPTA still sense no reason to produce gonadotropins and restore normal LH/FSH production. So ending HCG administration sometimes only brought on another crash. But staying on HCG for more than 3 weeks without at least a month off between HCG cycles could cause permanent gonadal dysfunction and/or a desensitizing of Leydig Cells.